Alright, it’s definitely been a significant amount of time since I finished the epic project and I think it’s finally time to talk about it.  This project completely changed how I think about myself as a crafter.  For those of you who are new to this blog, I started off as a knitter.  I’ve been knitting now for 15 years and I began spinning over 4 years ago.  But could I crochet? Not hardly.  I tried once back in high school before deciding that learning to knit might be a better idea for me (I ended up with the wonkiest piece of fabric when first trying to crochet).  Over the last couple of years, though, I’ve slowly taught myself basic crochet stitches and even successfully made a few items.  However, all of these were somewhat simple projects, usually involving only one type of stitch.

So of course, when I found out my sister was having her first child, I decided to go all out and find the most complex crochet blanket I have ever seen.  Okay – in my credit, that’s not exactly how this went down.  I saw the pattern on Pinterest and fell in love.  The colors were so bright and cheerful and all the textures looked like a baby’s dream come true.  I was so smitten that I couldn’t dream of NOT making this blanket.

Seemingly, anyone who crochets, and even many knitters, now know that I’m talking about the Sophie’s Universe blanket by Dedri Uys.  At the time that I found the pattern, it was just Sophie’s Garden – a much smaller blanket that I decided I would just add more rounds to until it was a size I was happy with.  But then when I was ready to buy the yarn, I noticed that the designer was hosting a mystery KAL for this larger version, and clearly I had to join in!

Little did I know that this blanket would take me nearly nine months to finish!  I took little breaks here and there when I had NO idea what I was doing and I just wasn’t mentally capable of learning another stitch or technique.  Plus, once it got to a certain size, and I couldn’t bring it back and forth to work on it during my lunch breaks, it became a bit more slow-going.  However, most of the slow down was that almost every round, I had to learn even more about crochet. 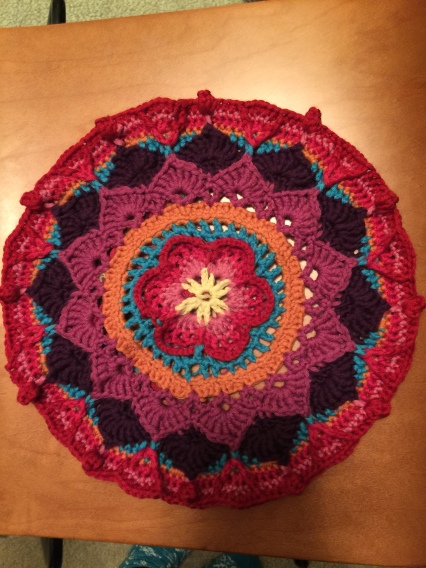 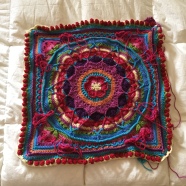 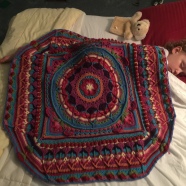 Yes, I used my sleeping child to give some perspective on the size… 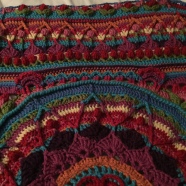 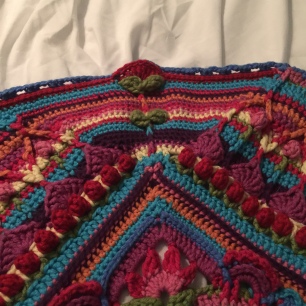 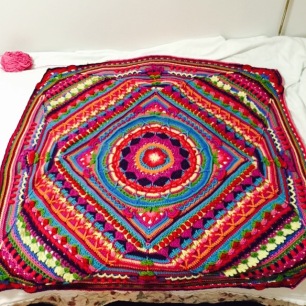 Some of my knitting friends joked with me at a retreat that I could no longer go around saying that I don’t really know how to crochet.  This blanket was essentially a master-crochet project.  I don’t really believe that’s the case – even though it certainly felt like it – but it definitely threw me into the deep end of crochet!  Or maybe off the deep end, I can’t decide….

Luckily, there was only one time that I was seriously discouraged while working on this blanket.  I foolishly started looking at other Ravelry project pages and nearly cried when I saw that someone had managed to crochet the entire blanket in 15 days.  15 DAYS!  At this point, I had put in a solid 6 months.  I was a little bit devastated by my incompetence and slowness.

In the end, I have no regrets.  This blanket became everything I dreamt of and every time my sister posts pictures of my niece even near this blanket, my heart sings.  The somewhat sad part – I’ve already promised my own daughter that I will eventually make her one.  I just have to somehow muster the inner-strength to take that one on… I’m thinking monotones and less color changes will likely be the game plan! 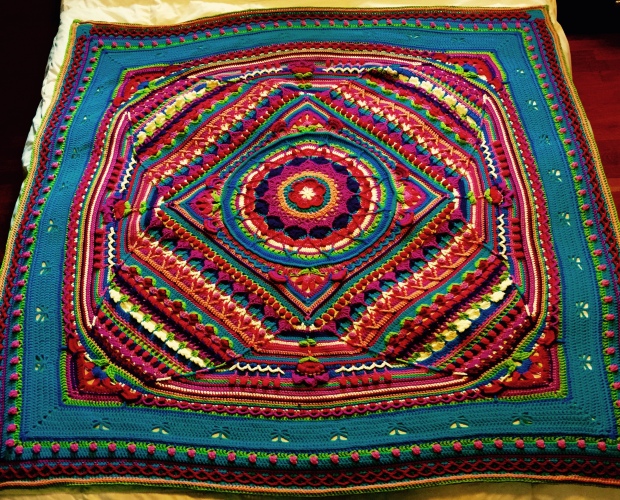 This entry was posted on May 9, 2016, 7:46 AM and is filed under Knitting Goals. You can follow any responses to this entry through RSS 2.0. You can leave a response, or trackback from your own site.