Is It Getting Hot in Here?

The next major event in my summer crafting was Tour de Fleece.  It’s a large event corresponding to the Tour de France where spinners set goals of either how much they want to accomplish or how much time they want to spin per day.  The general idea is to spin every day the cyclists ride and challenge ourselves during the Tour’s challenge day.

I knew well in advance exactly what I wanted to accomplish: the pound and a half of magenta Romney/Bamboo fiber I purchased at the Vienna Fiber Farmer’s market earlier in the year.  As a new spinner, it’s clearly a good idea to spin for a sweater, only three months after purchasing my wheel.  But I had the fiber and I knew I would want to knit a sweater for myself this fall.  However, this being the first year I was participating… and, you know, spinning at all, I was certain this was a very  ambitious goal.  I planned out every single day.  Sunday through Thursday every week, I would spin one ounce and Fridays and Saturdays, I would spin two ounces.  This would give me a few days to ply everything up at the end. 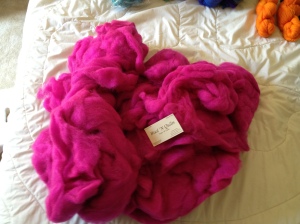 Before the Tour began, I started preparing.  I went through every inch of the fiber, picking out veggie matter and separating the fiber into one ounce balls, ready to spin.  I made up ziplock bags with four ounces each so I could be certain each bobbin had four ounces of singles.  I had a lot of traveling back and forth to my parent’s house planned during the Tour, so I wanted everything to be easy to grab and go and be able to pick up without wondering where I left off.

The night before the Tour began, we had the epic storm where seemingly everyone in Virginia, DC and Maryland lost power. I had planned to be at a kickoff party Saturday morning to get a head start, just in case my planning wasn’t good enough.  The last thing I wanted to do was spin wool without air conditioning, especially given the summer we’d been having.  Luckily, the event wasn’t cancelled, but instead was held on a balcony that remains sunless for the first half of the day.  I spun nearly eight ounces those first two days of the Tour… without air conditioning.

Luckily, the rest of my Tour de Fleece experience went quite well.  There were several days where I couldn’t spin, but every day I did, I spun so much, it made up for it.  It was this experience that taught me how much faster and thicker (as was my goal since I typically spin a lace weight two-ply) I can spin when I spin in a long-draw, woolen style.

I came out with an almost, maybe a little bit, consistent DK/Worsted (with some little chunky spots here and there) weight two-ply of 1288 yards.  Plenty for a simple cardigan, that I may have just cast on! I cannot wait for fall!

This entry was posted on August 22, 2012, 9:37 PM and is filed under Daily Life, Seasonal Crafting, Spinning!. You can follow any responses to this entry through RSS 2.0. You can leave a response, or trackback from your own site.