Posted by singularknitter in Knitting Goals, Seasonal Crafting on November 16, 2012

That’s right, we have less than 40 days to get all of our shopping, baking and crafting completed.  I may still have quite a lot of knitted projects to go, but I’m actually on schedule.  Looking at the numbers, though, that sounds crazy.  However, 3 of the 6 cowls are finished. One of the sweaters is half way done and another has about the first fourth completed.  The first of two shawls is nearly complete, I only need to attempt to purchase more yarn for the edging and to bind off.  In all, the major, time-consuming projects are well on their way.

The other projects I am attempting to complete will either have simpler patterns or a bulkier yarn so as to make them quicker knits.  Though I am keeping a list and re-prioritizing and redrawing out my schedule nearly every other day, just to reassure myself that I can finish everything in time… I am definitely feeling the pressure.  Especially since the door decoration seems to have slowed down to an intolerable pace…. More to come on that this weekend.

I hope your Thanksgiving preparations are going well! Pretty soon it will be normal for everyone to be talking about Christmas!

Posted by singularknitter in Knitting Goals, Seasonal Crafting on November 14, 2012

Do you feel it yet? Is the pressure on? It certainly is here! So how am I coping with the fact that I only have 41 days to complete my goals? That’s simple: I am COMPLETELY enjoying everything Christmas.  Music, check.  Movies, check. Eggnog and hot apple cider, check and check.  I might be making the season longer than “normal” people do, but why not cherish and enjoy it as much as possible?

One of my favorite holiday pass times – just ADDING Christmas movies to our Amazon Prime watchlist.  It may not have all the Christmasy goodness that Netflix does (from what I hear), but it has some of the wonderful movies I’ve grown to love and adore each holiday season. The other – my “Baby It’s Cold Outside” Pandora station – full of Christmas music and available all year round….. not that I listen to it all year… right.

But curling up under a blanket to watch Holiday Inn or listen to Ella Fitzgerald certainly gets me in the mood to do some holiday crafting.  So tell me, what are your holiday favorites, be it movies, music or anything that gets you excited for the season?  I may need some new inspiration once I’ve gone through all of mine…around halfway to Christmas!

Posted by singularknitter in Seasonal Crafting on November 13, 2012

With our door decoration well on its way (by that I mean maybe 6 inches tall), I am in the decorating mood! We got our first artificial Christmas tree over the weekend – a lovely 6.5 foot pre-lit Aspen Pine.  M also chose a beautiful holiday welcome mat and an in-your-face hip hop animated Santa and Elves decoration.  The tree is now official set up and in it’s semi-permanent place for the season and the beloved decorations are put in their places of honor.  We are ready. 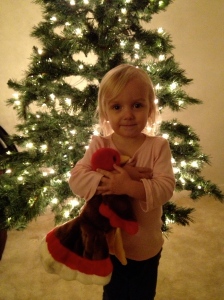 Well, M is ready.  I, of course, still have to finish our door decoration and twenty three more presents. Though we still have plenty more decorating to do, including hanging ornaments on the tree and putting up lights… well, everywhere, Christmas is certainly present in our apartment.  There seems to be nothing better than sitting next to a lit Christmas tree and knitting gifts for loved ones.

Up next: the joys of Christmas music while crafting. 🙂

Posted by singularknitter in Knitting Goals, Seasonal Crafting on November 10, 2012

Though it is generally only acceptable to discuss the holiday season until after Thanksgiving, I am a crafter. My holiday gift list grows every day and an early start means I will only be a little bit rushed and crazy the week of Christmas.

Over the next 45 days, I plan to check in daily with my progress.  That means: FAMILY, NO PEEKING! Some family members already know about some of the planned gifts, but I have saved a few surprises.  I will attempt to speak, write, photograph and maybe even share a few videos keeping everything abstract and in code so I am less likely to completely spoil all of the gift giving fun.  But if you have a feeling crafted presents might be for you: please avoid any posts titled with the Christmas countdown.  Thank you!

As of now, here is the current breakdown of presents:

Over the course of the season, the total presents to complete may fluctuate as I decide to hold off on certain presents, or if I go on a crazy streak, I add more presents to the list.  Tomorrow’s update will clue you in on the types of projects I intend to make.

But I’d like to put a call out: What are you planning on crafting this holiday season?

After struggling to put out a post that captures all of my daughter’s enthusiasm towards crafting, I decided to dedicate the majority of this post to photos and videos.

As a single parent, I try to do my best to balance normal toddler activities with my daughter and crafting time. But let’s face it, she’s growing up in an environment revolved around crafting…. that is the part that isn’t revolved around her. Luckily, she really embraces it. 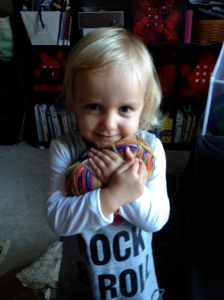 Giving some love to a swap gift

She even loves modeling finished projects when I forget to have someone take a picture for me: 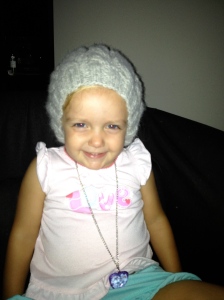 Beyond creating any form of art with craft supplies, she has found that they are some of her new favorite toys for imaginative play.  Just last night she decided to dump out all of our buttons and sort them into families, having the buttons talk to each other and “find each other”. Little buttons went searching clear across the bed for their moms, dads, brothers and sisters, asking for help from other buttons along the way.

M also partakes in her own knitting during my knitting or spinning time.  She often takes out some of “her” yarn and sits with me, pretending to knit.  She often creates projects that she’s making and let’s me know to whom the finished items will go.

That being said, she definitely has a love for a ladybug in our lives – my spinning wheel.  Back in the days when I would take a spinning break during her naps on weekends, she would wake up and sneak into my lap, slowly sliding her feet down to the treadles to “help” me.  This has now evolved to her going up to my wheel asking to spin.  I set it up so that any project I was working on was entirely on the bobbin so she could treadle by herself and nothing would get in the way.

Recently, she asked if she could spin her own yarn.  After months of treadling by herself, I decided adding the next step wouldn’t hurt.  I predrafted some fiber I had received during my wheel spinning class so that she could spin without needing to draft at the same time.  She sat down and went to it:

I think her first handspun is beautiful and definitely going in the scrapbook…. though I might be biased.

Crafting Under The Influence… Of Illness

Posted by singularknitter in Daily Life on March 2, 2012

M gets sick… a lot. She’s two years old, so it’s expected. Unfortunately, every time she gets sick, I do too. We are, however, very different when we’re sick. I just want to lie around and do next to nothing, while she wants to be no where near a bed and instead gets rather hyperactive. So when I found that we needed to take a day off for her to go see the doctor, all the while nursing my own illness, I knew it would be rough trying to get some crafting in.

The morning went well, with few tantrums (from either of us) and a lot of snuggling in bed before her appointment. Just how a sick day should be spent. Then we packed up and went to the doctor’s appointment. Of course, I brought both of my drop spindles, more fiber than I could ever spin on a day spent completely by myself, and a simple cable cowl I’m knitting up. Though it was highly unlikely that I would touch any of these at the appointment, I did take the time to carefully choose projects to bring that would require little-to-no brain power. I just didn’t want to risk knitting a challenging project under a cloud of sickness… I needed to just relax and zone out.

It was a beautiful day, so when we arrive an hour early to the appointment, we decided to park, roll down all the windows and talk while I pre-drafted some fiber. After a surprising ten minutes of M sitting still, it was time to go inside. Fortunately, we were seen right away and didn’t have to go through the waiting room torture of M racing out of the room every time I tried to sit down.

After her appointment and lunch, I thought I would get the lazy knitting and/or spinning time I so desired during nap time. I kept waiting and waiting, trying to calm, getting frustrated, leaving the room, sitting in the room, rocking. I did everything. Almost anything to get my daughter to sleep so I could rest and relax. When it was finally clear that this was a giant waste of time for both of us, I gave up. She insisted on watching 101 Dalmatians and let me spin sitting next to her.

It was just what we needed, to revert back to how our morning was spent, lounging and doing very simple crafting. She watched the movie and me spinning and seemed equally fascinated when I relaxed and felt productive at the same time. Now that she’s been on antibiotics for two days, while I continue to get worse, here’s hoping that this weekend is full of relaxing, mindless crafting while lying in bed ignoring the two hour restriction on screen time.